The time has come! Now that we have all had one whole year to recoup, Monster Energy Rock Allegiance returns Saturday, October 7 at BB&T Pavilion and Wiggins WaterfrontPark in Camden, NJ.

With an assortment of Philly inspired food options, regional and national craft beer, band meet-and-greets, and featuring over 20 bands on three stages, rock and roll culture has and will continue to overflow at Monster Energy Rock Allegiance and the fans…they will be taking in every last drop of it.

"Rock Allegiance has become a staple on the U.S. festival circuit. It's one of the coolest festivals out there for fans to discover new music and see their favorite bands live. We are excited to return this year to see our friends and fans in Philly. Don't miss it! It will be another great one this year." Zoltan Bathory of Five Finger Death Punch 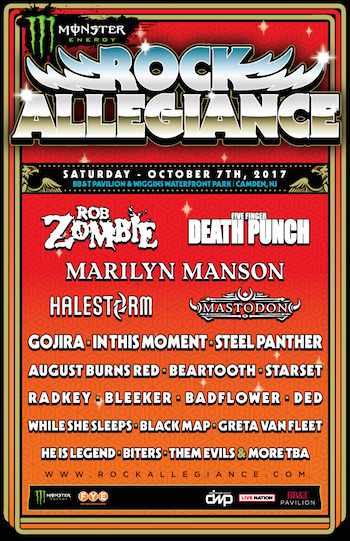 The current music lineup for Monster Energy Rock Allegiance is as follows: ‪

UPDATE: Due to circumstances out of the Rock Allegiance crew's control, Marilyn Manson will not be appearing at Rock Allegiance. New Years Day has been added to the #RockAllegiance lineup, while Mastodon has been moved to the main stage.

"We are so excited about being a part of Rock Allegiance 2017! We've been busy writing new music for our next record and have been missing the stage. We cannot wait to see all of you and give a loud offering to the Rock N Roll gods!!" Lzzy Hale of Halestorm

Monster Energy Rock Allegiance VIP tickets include:
-Great seats in the 100 level of the Main Stage / Pavilion for the headlining four band performances
-Commemorative Rock Allegiance 2017 VIP laminate
-VIP entrance to the festival
-VIP hang areas on the Battleship New Jersey, Blackbox and BB&T Pavilion lounge (space limited at each area)
-Exclusive VIP restrooms, special food and beverage offerings (for additional purchase), and -exclusive VIP Afterparty on the Battleship New Jersey (space limited).
*During the first portion of the festival, all seating will be general admission. For the headlining four bands, the Main Stage / Pavilion will be assigned seating based on the ticket purchased. 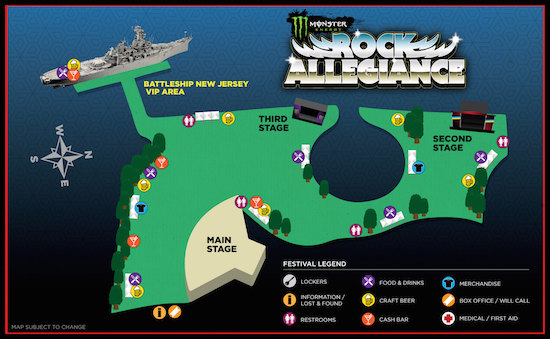 The initial food lineup for the festival includes:
Baby Blues BBQ
Chickies & Pete's
Nico's Pizza and More
Sum Pig Food Truck
The Cow and The Curd
Trent's Treats
Many more to be announced!

The festival is fueled by Monster Energy. Additional sponsors include FYE, Roadrunner Records, Razor & Tie, Century Media and Another Century, with more to be announced soon.