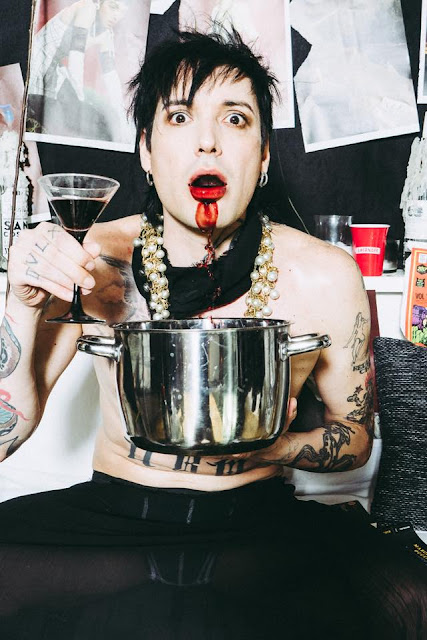 Originating in Los Angeles, CA, Berlin based  Alternative Rock artists The Dark are definitely one of a kind. With gritty melodic sounds, bringing back elements of 90’s rock they are one band that you absolutely want to be gracing your ears this summer and beyond.
On May 3rd The Dark will be releasing their debut album "Live.Create.Destroy." The band’s live line up consist of Brandon Ashley (Vocals, Guitar),  Adrian Gray (Bass, Back up Vocals), Kris Fiore (Guitar, Back up Vocals) and Dam (Drums). There’s no doubt that the explosion of dark sexy rock tunes will immediately get stuck in your head and have you begging for more!

We had the pleasure to catch up with Brandon to get to know a little bit more about him, the band, what this album means to him and what we could be expecting next.


C&C: Tell us about you and how The Dark came together.
Everything started a few years ago in Los Angeles. I had just released the music video for my single “My Decadent Thursday” when I got contacted by Jonny Coffin, owner at Coffin Case. He wanted to tell me he liked my work and invited me over at his quarters in NoHo. We chatted about music and he suggested it was time for me to make a new band. After brainstorming for a while we came up with the name The Dark. Honestly it sounded too good to not be already taken, but then after doing some research we realized there was no relevant act using that name already. I took it and made it my own brand to these days. When I was finished tracking the album I put out a post in Berlin musicians group and auditioned a few guys, Chris Fiore, Adrian Grey and Dom Fanti are insanely talented musicians and when we had our first rehearsal together it just clicked and we knew we were brothers. I’m looking forward to writing the next album with them. 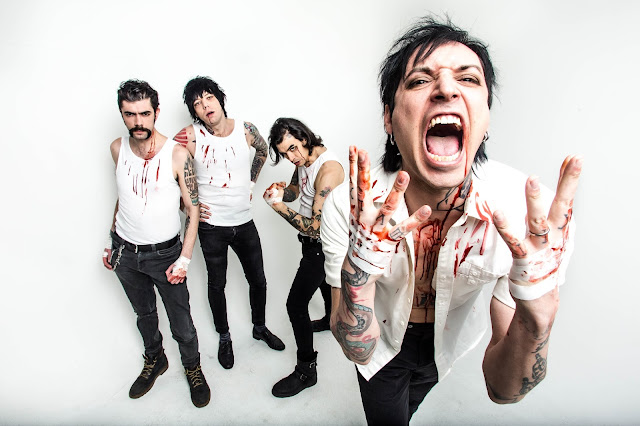 C&C: Your debut Album Live.Create. Destroy will be released May 3rd. (Congratulations by the way!) What can fans expect?
BA: Thank you! With this debut album I was finally able to come up with a signature sound which I think represents my intentions as a songwriter/producer, which is making dark music big again in the alternative/rock world. My previous works used to sound more on the electronic/industrial side, therefore someone might not expect The Dark becoming more of a rock band. This transformation happened as I wanted to go back to my real big passion, which is 90’s rock. I still like to use dirty electronic sounds and beats here and there depending on the track. I honestly think the real game changer was tracking these very fuzzy guitars and massive stoner/rock drums. My songwriting style has always been melodic with very catchy vocals: that stayed the same on this record. Overall this is a heavy record that wants to make an artistic statement about many social issues and personal battles, it is for the listener to interpret what that statement is to them. All art has an aspect of ambiguity and mystery, this is what can make a record very personal for each individual. It’s not spelled out, you must find what Live Create Destroy means to you.

C&C: We heard that one of your tracks, Lost At Sea, has a very deep and personal meaning to you. Do you mind sharing how this song came about and what it means to you?
BA: Lost At Sea was written to remember my father Renato who died tragically on a expedition in the Mediterranean Sea when I was 18 years old. Him and his father, my grandfather sailed on a voyage from Italy to Greece during the night, a storm hit and they were never heard from again. I am the last of our blood line.
My relationship with my father was always very complicated, but he was the one who gave me my music gift, he was a jazz pianist, he lived an exciting life and met his fate in the exact way he chose to live.
It took me years to recover from this traumatic event and writing this song was one of the most important accomplishments in my life, I hope somehow, he can hear it from the afterlife.

C&C: Do most of the songs on this album mirror your life and experiences? What was the process like writing the album, stirring up past memories and bringing them to life again?
BA: I’d say the entire record idea came as a necessity to close a door on the last ten years. You can call it a therapy, but I knew I couldn't let the demons rest until I was finished with this work. It was my destiny to get lost and find a way out of this madness by writing a record and telling everyone else out there my story. I went through personal loss which triggered the abuse of narcotics and alcohol during my teen years. I’ve got my heart broken a million times and I broke many more myself. I honestly almost died a bunch of times and lived my life as a statement of decay. I wanted to come clean with this record and finally being able to talk about these things from my own perspective. It is not guilt that inspired me to say these things, but honesty in a moment of clearance. I’ve always lived my life with passion, for good or bad and this will never go away. I’m not afraid of being judged and I’m convinced many other people out there will be able to relate to my story, that has a happy ending. 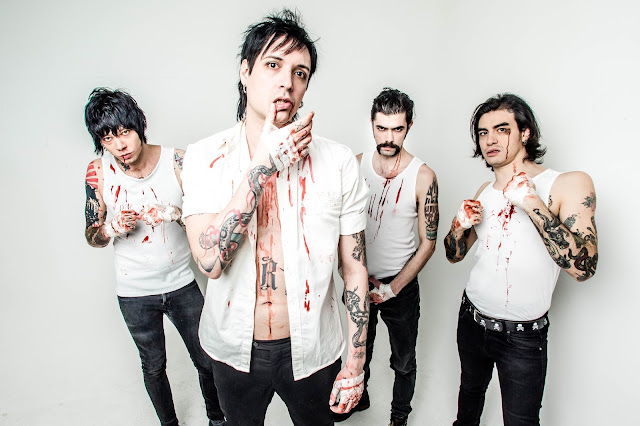 C&C: What are your top 2 tracks on the record and why?
BA: Bad Gentleman is the first song I worked on once I moved to Berlin. It makes the real change in my career as a musician. I’ve never wrote anything like that before. So once I was finished with that, the rest of the songs on the album came quickly and spontaneously. This song is obviously about being bad, but with style. I somehow always had my code even when I used to do real fucked up shit. No matter what you are doing, do it with style...even more if that's the last thing you’re gonna do on earth.
Last Day We Kissed is my other pick off this album. It is a song for lovers while being a very dark track. Love has always been a very relevant topic in my life. I feel things different from others, my feelings are way more intense than the average person and I’ve always struggled finding a person I could vibrate on the same level as me. I have suffered a lot in my past because of the intensity of my feelings and even though now I feel like I’m a more balanced person than I used to be in the past I wanted to communicate this big passion of mine through a dark love song. I went totally dramatic and I can still feel the power of the chords every time I play it.

C&C: As a band what has been your greatest challenge and success up until this point?
BA: The biggest challenge was finding myself as The Dark. It took me a while to figure out what this band was supposed to be and sounding like. I want everything I do to be meaningful and artistic or I get bored. So yeah writing this record was the first chapter and now I perfectly know that every other step is going to be easier because I know who I wanna be. The biggest success was probably being chosen by a legend such as Peter Murphy from Bauhaus to support his act. I honestly have never thought that could happen, but it did. That gave me so much self-esteem and also inspired me to write Live. Create. Destroy.

C&C: Who have been some of your most memorable bands to play with so far and who do you look forward to playing with in the future?
BA: When I opened for Iron Maiden at Rock in India 2009 in Bangalore I realized I was born to do this and there was a plan for me. I simply walked on stage in front of 50.000 people and felt in my own element. I remember I was eleven years old when a friend of mine back then played for me “The Trooper”. I was like blown away! My mother used to throw my music magazines in the trash because she was convinced it was the devil’s talk and I wasn't obviously stoked about that so I remember telling her: "You can throw all my magazines in the garbage, but one day I will play with Iron Maiden and there is nothing you can do about it”. Surprisingly that’s exactly what happened. Fortunately through the years my mother realized that there’s no arm in music and she was very happy for me when I got to open for my idols. Currently I’d really love to play with the guys from Palaye Royale, I love their sound and their look, I think it would be a great match.

C&C: What do you have in store for fans in the near future and where can they expect to see you?
BA: I will keep creating until I will have nothing to say at all. I will keep evolving so it’s important to understand that each album represents a different time in my life as an artist. I don’t see myself staying the same but instead evolving throughout the years. I wanna be able to emulate my favorite artists like Bowie, Lou Reed and Mick Jagger who stayed true to themselves while being exposed to different things throughout their amazing careers. If I stop trying new experiences or to look at things from a different angle then I get bored and that’s when I fuck shit up badly. I can’t go back to being a total hot mess so I need to stay creative and let the music do the talking.
I want my fans to know that I care so much about each one of them. I run my own social media and I know all their faces on Instagram. I like when they reach out, they always find very special ways to make me feel loved and being a total attention whore I could never live without that. I will never stop giving back with my music and I’m happy to know that means something to someone else out there.

C&C: Any last words for your fans and our viewers?
BA: Be yourself always and don’t be afraid of change. Let the people you admire and the things that you love inspiring you to fulfill your destiny. My album “Live. Create. Destroy.” can help you with that and it drops on May 3rd on all relevant digital platforms.