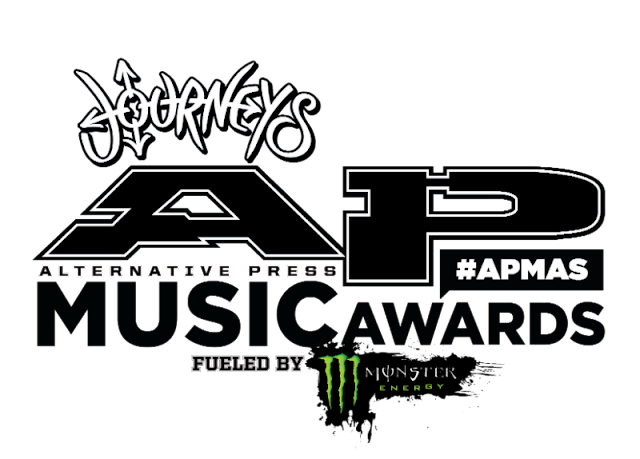 The 2017 Journeys Alternative Press Music Awards Fueled By Monster celebrated its fourth year in Cleveland, OH last night at the KeyBank State Theatre. With a lineup of kick ass presenters and a massive assortment of performances it was undoubtedly proof that rock music and its sub cultures will forever stay and are still holding strong. The crowd fed off of not only the incredible award show vibes but also the setting and its outstanding features which only amplified the anticipation of what was to come that evening. Couldn’t attend the show? Amazon Music and Twitch had those fans covered allowing the show to go international, broadcasting worldwide for your viewing pleasure.

The run down:
-It all began with a vivacious version of "Good Time" by All Time Low, from there performers continuously kept the crowd entertained and begging for more.

-New Years Day-led by Ash Costello with help from Halestorm frontwoman Lzzy Hale on a cover of "Only Happy When It Rains" by alternative rock icons Garbage.

-Plain White T's performed an acoustic version of their hit "Hey There, Delilah"

-Nothing More kept the amps off for a set that included three songs, "Go To War," "This Is The First Time (Ballast)," and a captivating version of Skrillex's "First Of The Year."

-Pierce The Veil offered a stimulating presentation of "Circles," as well as a moving cover of Soundgarden's "Black Hole Sun."

- Starset mesmerized the crowd with "Satellite."

-Andrew McMahon In The Wilderness visited "Cecilia And The Satellite" and additional points in his career from Something Corporate days ("I Woke Up In A Car") and Jack's Mannequin ("Dark Blue").

- Waterparks performed "Stupid For You."

-Dance Gavin Dance got the crowd going with "Betrayed By The Game."

-Sleeping With Sirens recruited a youth choir to perform "Legends," the first single from their awaited album.''

-Host Biersack and wife Juliet Simms performed Adele's "When We Were Young."


Award deets:
-This year's set of honorary APMAs "Skullys" included the introduction of the new Influencer award, which was given to John Feldmann for his multi-faceted and exceedingly storied career working with artists of all genres.

-Icon Award recipient Laura Jane Graceof Against Me! was acknowledged for her support in the transgender community, encouraging awareness and cultural understanding.

-After receiving this year's honorary Icon award from PVRIS' Lynn Gunn and Mina Caputo of NYC metal unit Life Of Agony, Grace took the stage with Against Me! for versions of "I Was A Teenage Anarchist" and a medley including "Delicate, Petite And All -The Things I'll Never Be," the Supremes' 1964 hit "Where Did Our Love Go," and "True Trans Soul Rebel" - two of which featured passionate, crowd-stirring duets with Caputo.”

- Korn were given the Vanguard award for their momentous impact in heavy music.

-This year's Philanthropic Grant award sponsored by Hopeless/Sub City was given to Cassie Wilson, founder of Half Access, whose organization (halfaccess.org) provides information about music venues' capability to accommodate disabled patrons.

ARTIST OF THE YEAR presented by Monster Energy: PANIC! AT THE DISCO

ALBUM OF THE YEAR presented by Journeys: Misadventures, PIERCE THE VEIL

SONG OF THE YEAR presented by Epitaph Records: ANDY BLACK, "We Don't Have To Dance"

PHILANTHROPIC GRANT presented by Sub City/Hopeless Records: Cassie Wilson of Half Access, presented by Dan Campbell of the Wonder Years.

Music fans may view encore presentations of the show via Amazon for a limited window of 72 hours. Go to music.amazon.com/apmas to watch the entire show before 7 p.m. ET, July 20.
For recaps and other show information, visit www.altpress.com/apmas.